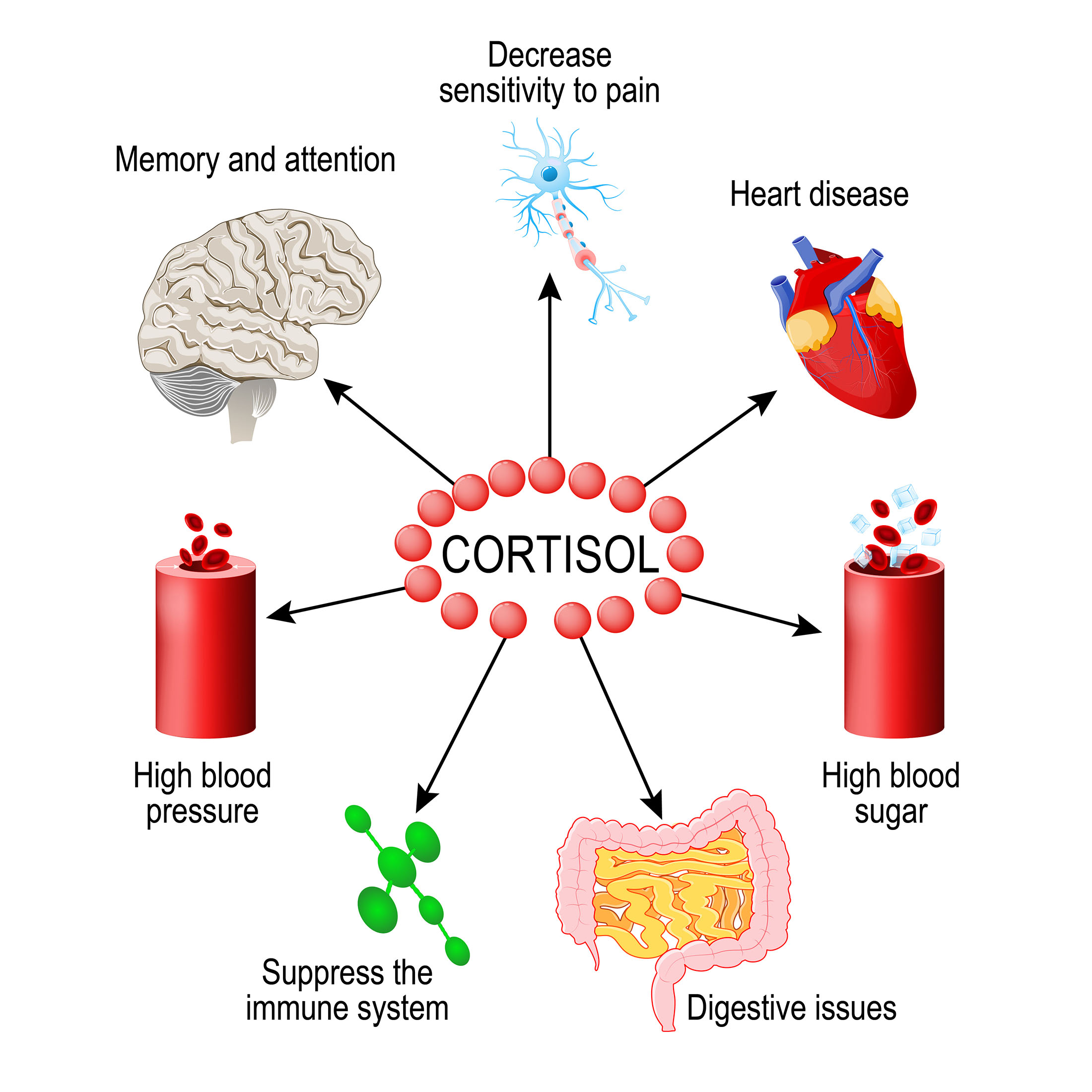 What Is Cortisol and What Does It Have to Do with Stress?

Cortisol is a steroid hormone that regulates a wide range of vital processes throughout the body, including metabolism and the immune response.

It also has a very important role in helping the body respond to stress. Cortisol is a steroid hormone, one of the glucocorticoidsmade in the cortex of the adrenal glands and then released into the blood, which transports it all round the body. Almost every cell contains receptors for cortisol and so cortisol can have lots of different actions depending on which sort of cells it is acting upon.

In many species cortisol is also responsible for triggering the processes involved in giving birth. A similar version of this hormone, known as corticosteroneis produced by rodents, birds and reptiles. Blood levels of cortisol vary throughout the day, but generally are higher in the morning when we wake up, and then fall throughout the day. This is called a diurnal rhythm.

In people that work at night, this pattern is reversed, so the timing of cortisol release is clearly linked to daily activity patterns. In addition, in response to stress, extra cortisol is released to help the body to respond appropriately.

The secretion of cortisol is mainly controlled by three inter-communicating regions of the body; the hypothalamus in the brain, the pituitary gland and the adrenal gland.

This is called the hypothalamic—pituitary—adrenal axis. When cortisol levels in the blood are low, a group of cells in a region of the brain called the hypothalamus releases corticotrophin-releasing hormonewhich causes the pituitary gland to secrete another hormone, adrenocorticotropic hormoneinto the bloodstream. High levels of adrenocorticotropic hormone are detected in the adrenal glands and stimulate the secretion of cortisol, causing blood levels of cortisol to rise.

As the cortisol levels rise, they start to block the release of corticotrophin-releasing hormone from the hypothalamus and adrenocorticotropic hormone from the pituitary. As a result, the adrenocorticotropic hormone levels start to drop, which then leads to a drop in cortisol levels. This is called a negative feedback loop. Too much cortisol over a prolonged period of time can lead to a condition called Cushing's syndrome.

This can be caused by a wide range of factors, such as a tumour that produces adrenocorticotropic hormone and therefore increases cortisol secretionor taking certain types of drugs. The symptoms include:. High cortisol levels over a prolonged time can also cause lack of sex drive and, in women, periods can become irregular, less frequent or stop altogether amenorrhoea.

In addition, there has been a long-standing association between raised or impaired regulation of cortisol levels and a number of psychiatric conditions such as anxiety and depression. However, the significance of this is not yet clearly understood.

Too little cortisol may be due to a problem in the pituitary gland or the adrenal gland Addison's disease. The onset of symptoms is often very gradual. Symptoms may include fatigue, dizziness especially upon standingweight loss, muscle weakness, mood changes and the darkening of regions of the skin. Without treatment, this is a potentially life-threatening condition.

Urgent assessment by a specialist hormone doctor called an endocrinologist is required when a diagnosis of Cushing's syndrome or Addison's disease is suspected. About Contact Events News. Search Search. You and Your Hormones. Students Teachers Patients Browse. Human body.

Alternative names for cortisol Hydrocortisone What is cortisol? How is cortisol controlled? What happens if I have too much cortisol? The symptoms include: rapid weight gain mainly in the face, chest and abdomen contrasted with slender arms and legs a flushed and round face high blood pressure osteoporosis skin changes bruises and purple stretch marks muscle weakness mood swings, which show as anxiety, depression or irritability increased thirst and frequency of urination.

What happens if I have too little cortisol? Last reviewed: What is a coin card Prev. Corticotrophin-releasing hormone. Related Glands.

What Is Cortisol and its Purpose?

Cortisol is a steroid hormone that is produced by the adrenal glands, which sit on top of each kidney. When released into the bloodstream, cortisol can act on many different parts of the body and can help: the body respond to stress or danger. increase the body’s metabolism of glucose. control blood pressure. Cortisol causes the body to be insulin-resistant so that the brain has enough glucose to run on. Cortisol replenishes energy stores that become depleted because of epinephrine. Cortisol does this by converting protein into glycogen & starts the process of storing fat. Jan 29,  · Most cells in your body have cortisol receptors, meaning the cells absorb and use cortisol. But cortisol is used differently in different parts of the body. The short list of cortisol’s jobs in the body include: Manage blood sugar (glucose) levels.

What is cortisol? It's an important chemical that manages blood sugar glucose ,reduces inflammation, and controls blood pressure, among other options. But just what is cortisol? And what does it do? Probably more than you realize.

Right above each kidney is a small but important gland known as an adrenal gland. The adrenal glands produce some important hormones, including adrenaline and cortisol. Most cells in your body have cortisol receptors, meaning the cells absorb and use cortisol. But cortisol is used differently in different parts of the body. Stress is a main cause of high levels of cortisol secretion.

Cortisol is a hormone produced by the adrenal cortex. The rhythm of cortisol production by the adrenal glands is also a factor in your sleep routine. Too much cortisol in the bloodstream at night makes it harder to fall asleep.

Low levels of the hormone in the morning can make it tough to get out of bed. In fact, having a healthy variation of cortisol levels throughout the day is associated with better health. Adam and her colleagues published a study in that found higher risks of inflammation and immune system problems in people who had little variation throughout the day in their cortisol levels.

Conditions such as fatigue, depression, and even cancer were more likely among people whose cortisol cycles were abnormal. Getting regular exercise each day and establishing a consistent bedtime and wake-up time are some easy ways you can start to establish healthy cortisol production.

Adam said. Fight or flight: the way your body reacts when facing danger. So what is cortisol doing when you encounter a stressful situation?

When you feel threatened, the adrenal glands start pumping out cortisol, causing your muscles to tense and your breathing and heart rates to increase. All of this happens faster than your brain can fully comprehend a situation, allowing you to, for example, jump out of the way of an oncoming car.

If you need to flee a life-threatening situation, rising levels of cortisol and other hormones, such as epinephrine, also known as adrenaline in your bloodstream will help you escape. Unfortunately, the stress response and a boost in cortisol levels can occur in a traffic jam and many other stressful, but certainly not life-threatening situations. For example, a University of Texas study found that cortisol tends to block the effects of the hormone testosterone.

Women dealing with chronic stress and elevated cortisol levels also can face reproductive challenges, as cortisol can interfere with normal menstrual cycles and fertility. Josephs says. Each condition can be problematic. Too little cortisol can lead to muscle weakness, fatigue, nausea , and pain in the abdomen.

Low cortisol levels are also associated with behavior issues. A University of Chicago study of pre-adolescent boys found that low levels of cortisol in saliva may affect how they respond to stressful situations and even how they perceive the consequences of acting out as a response to stress. You can be prescribed corticosteroids if you have low cortisol levels.

And if you are chronically stressed, therapy and relaxation training yoga or meditation , for example may help bring down cortisol levels in your blood. Poorly controlled cortisol levels are associated with mental health disorders, including anxiety and depression, though the significance of this relationship is still not clearly understood. If you have questions about whether your cortisol levels are in a healthy range, or if you need help coping with stress, talk with your doctor.

Cortisol can be screened with a blood test and a saliva test. There are even patches with sensors that can measure the cortisol in sweat. As a service to our readers, University Health News offers a vast archive of free digital content. Please note the date published or last update on all articles. No content on this site, regardless of date, should ever be used as a substitute for direct medical advice from your doctor or other qualified clinician. In … Read More. View all posts by Jay Roland.

Remember Me This setting should only be used on your home or work computer. It is regularly updated. Can Stress Cause Diarrhea?

1 thoughts on “What does cortisol do in the body”